For more than a century Wageningen University & Research (WUR), which the Foundation Wageningen Research (WR) is part of, has been involved in research in the domain of healthy food and living environment. As such, WUR has built a reputation in performing high quality interdisciplinary research with an international orientation, in close collaboration with the users of the research results. Currently, WUR has nearly 14,000 students and over 6,000 staff members. WR consists of a number of leading, specialized institutes for applied research in this domain.

The Centre for Genetic Resources, the Netherlands (CGN), established in 1984, carries out specific ‘statutory research tasks’ for the Dutch Ministry of Agriculture, Nature and Food Quality. CGN is a leading center of expertise in Europe and globally for the conservation and use of genetic diversity in crops, farm animals, trees and shrubs. CGN carries out methodological research, and participates actively in national, European and global organizations and networks. CGN staff represent the Dutch government in the respective networks EUFORGEN, ECPGR and ERFP for forest, plant and animal genetic resources. CGN collaborates actively with the private breeding industry and national NGO’s, and supports the Dutch government in the field of policy development and implementation. CGN has a long-lasting record of accomplishment of coordination and participation in EU projects. Because of this CGN has a unique position in Europe with an extensive network in the area of conservation and sustainable use of genetic resources. CGN maintains the Dutch national genebank, which includes over 23,000 accession from a total of more than 30 crops. Currently, the cluster Plant of CGN has 13 staff members. CGN has a main focus on vegetable crops, but also maintains the genetic resources of 2664 barley and 4912 wheat accessions.

The department of Plant Breeding is involved in education, research and consultation in the field of plant breeding in the broadest sense. Education is performed at all levels from BSc, MSc and PhD to specific courses for external parties. Within Plant Breeding the main research focus is on the development, characterization, maintenance and exploitation of genetic material. To this end collections of plants (segregating populations, NILs, RILs, DH, transformation host etc.) are made in the most important focus crops Brassica rapa, barley, potato, tomato, lily and rose. Besides this, tools for efficient breeding are developed, such as molecular markers for traits (genes, libraries, maps etc.). This leads to the deposition of large amounts of phenotypic and descriptive data (Transcriptomics, Proteomics, Metabolomics, Microarray, consumer tests) in databases. The efficient use and integration of all these datasets is made possible through the development and implementation of statistical & computer programs. The department of Plant Breeding has more than 120 personnel and between 50-80 students and guests. Research is organized around five themes (growth, development and quality; (a)biotic stress resistance; biodiversity and genetic variation; biobased economy; quantitative aspects) with emphasis on crop plants and the model species Arabidopsis. The department of Plant Breeding and CGN are jointly participating in AGENT as WR. 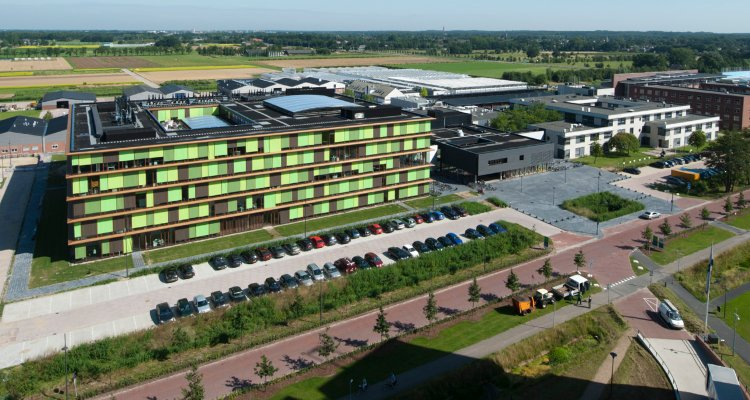 Part of Wageningen campus, where CGN and the department of Plant Breeding are housed

In the framework of WP3 CGN made a selection of its genebank accessions and provided seed samples for the development of precision collections of barley and wheat. In addition, CGN has contributed accessions for the bridging collection and has provided historical phenotypic data on its accessions for further analysis in AGENT. The department of Plant Breeding is involved in the work on data standardization and data interoperability (WP5) and in the creation of GenRes data infrastructure (WP6). In these workpackages WR is leading the work on the specification of the formats required for data representation and exchange (Task 5.2) and that on the development of a portable set of interoperable tools for analysis and predictive modelling of genetic resources (Task 6.2). In WP7 CGN is leading Task 7.1 on genebank community capacity building and Task 7.2 on training and capacity building in genebank genomics. 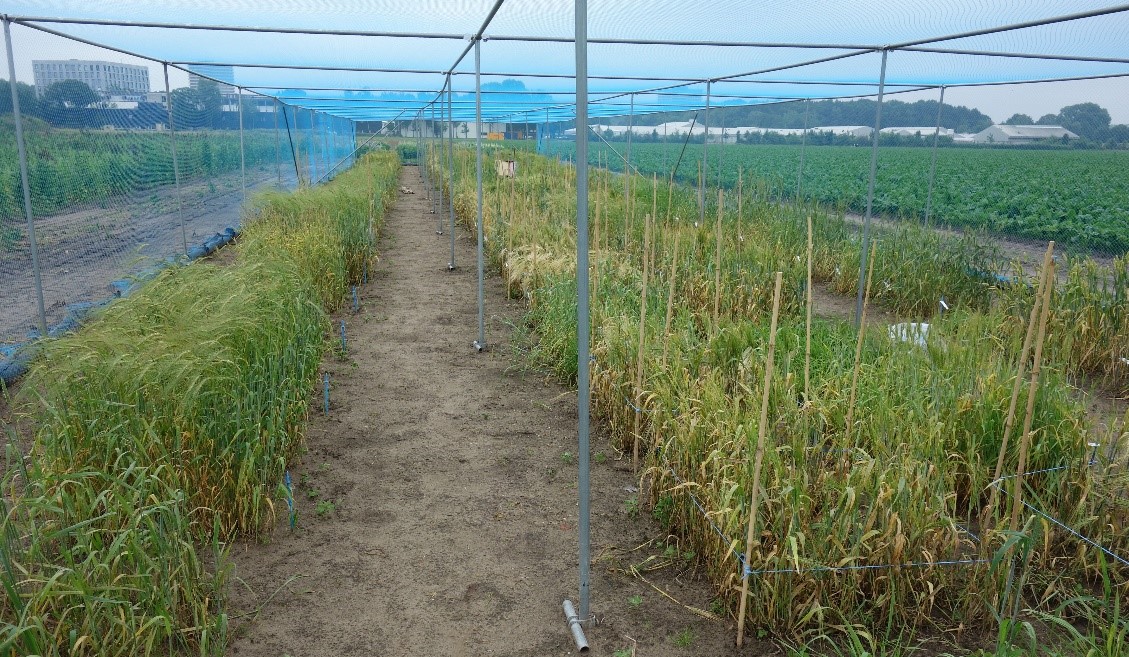 Rob van Treuren has a background in population genetics and conservation biology. He started working at CGN in 1998 as a scientific researcher in the application of molecular marker technologies in the management of plant genetic resources. Since then the scope of his research has widened over the years. He has been involved in over 100 publications. Currently, he’s a senior scientist at CGN, combining research work with the curation of several leafy vegetable collections and the conservation of Dutch crop wild relatives. He is leader of the Fundamental Research project on plant genetic resources at CGN. He has been involved as co-initiator, sub coordinator and work package leader in several EU-funded projects. For several years he has been the chair of working group on leafy vegetables of the European Cooperative Programme for Plant Genetic Resources (ECPGR). Rob is the team leader of WR in AGENT.

Theo van Hintum is an experienced scientist in the field of PGR conservation and sustainable use and is currently heading the activities in the cluster Plant of CGN. He has a background in genebank methodology and research. He has wide experience in science and project management and is a leading member of the European PGRFA community. His research covered a wide array of topics including the application of new technologies, such as biotech and ICT, to genebank management, but also quantitative genetic approaches to the composition of genebank collections. He is National Coordinator for PGR in the Netherlands, is active on several international platforms related to PGR management, has undertaken many reviews and consultancies and has published over 70 papers in peer-reviewed scientific journals. Theo is coordinator of the activities related to the genebank community capacity building.

Noor Bas works as a research assistant at CGN. She has a long-lasting experience as curator of several CGN crops, including wheat and barley. In this function she has developed ample expertise in accession maintenance (e.g. seed multiplication) and evaluation (e.g. phenotyping). She has been involved in several EU projects and NGO initiatives. She actively participates in several workings groups of the ECPGR and has been co-author of several publications related to plant genetic resources management. Noor is involved in the work related to the precision collection and bridging collection and to the historical phenotypic data.

Roel Hoekstra is a researcher at CGN. He has a long-lasting background in curating CGN’s potato collection and is currently also curator of the collections of carrot, carraway and beet. He’s also a member of the documentation section of CGN Plant, and in particular is involved in the development and maintenance of CGN’s database. In addition, he’s responsible for the online searchability of the phenotypic data for the users. He has been the coordinator of the former EU project GenRes – CT95 – 34/45 on genetic resources of potato and has been involved in the former EU project BioExploit. He has also chaired the ECPGR Potato Working Group for many years. Roel is involved in the work related to data processing and preparation and to the uploading of CGN’s data on the FAIRDOM platform.

Matthijs Brouwer is researcher at the department of Plant Breeding. He studied Mathematics and Physics. After some years in this field, he has been employed for almost ten years in the Humanities and moved four years ago to Plant Breeding. Here he is working on multiple projects including haplotyping of polyploids and data management. Matthijs works together with Reinhoud on the development of data formats and data validation tools.

Reinhoud de Blok is researcher at the department of Plant Breeding. His background is in the aquatic microbiology. In previous jobs he used different measurements ranging from innovative techniques to monitor planktonic and benthic communities to hydrographic techniques to measure physical characteristics of waterbodies and seafloor in the North Sea. He is working on different research projects and he is the data steward of Plant Breeding. Reinhoud works together with Matthijs on the development of data formats and data validation tools.

Edouard Severing is researcher at the department of Plant Breeding. He obtained his master degrees in biology with specialization in evolutionary biology and bioinformatics. After obtaining his PhD at Wageningen UR he did a post-doc at the Max Planck institute for plant breeding research in Cologne, Germany. Currently, he works on several projects including comparative genomics. Edouard is involved in the work related to GenRes data infrastructure, in particular regarding tool development for the analysis and predictive modelling of genetic resources.

OUR VIEW OF AGENT

Large-scale genotyping of genebank accessions has become commonplace but the wealth of data generally remains largely unexploited because of the lack of proper, user-friendly analysis and visualization tools. AGENT aims to change this perspective by developing the necessary bioinformatics tools for integrating passport, phenotypic and genotypic data using wheat and barley as study cases. This will be extremely useful for both the conservation and user community of genetic resources. Therefore, we consider AGENT an important and exciting project that may set a methodological standard for crop collections.